Writer and First Draft’s producer Abi Hynes blogs about the art of giving and receiving feedback.

I never used to be any good at getting feedback.

If you make creative work of any sort, you might recognise how it usually goes for me. I write something. For a first draft, it comes from this intangible, murky centre of myself, with very little intervention from my critical brain. It spills out onto the page, and I step back and admire its mysterious power. I don’t want to look at it too closely – to ask too many questions about which parts of it work (or don’t work), and why. I don’t want to break the spell.

But I know I have to. Sometimes I might tackle a second, a third, even a fourth draft on my own, trying to be objective, trying to hone and tighten and improve. But at some point, I know I want it to reach an audience. And before I’m prepared to let it loose on the indifferent world, I’ve learnt the importance of recruiting some trusted advisors to take a look, and point out all the places where I’m going wrong. 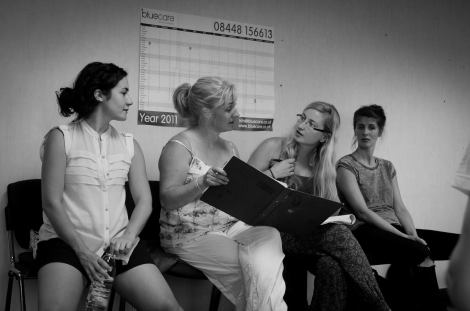 Then, quite often, comes the crash. The sinking disappointment when this personal creation that seemed so magical before is not necessarily ‘the absolute best thing’ they’ve ever seen or read. The creeping embarrassment when you’re confronted with your mistakes, pointed out gently with an ‘I wonder if you’ve thought about…’ or a ‘The concern I have with it is this…’. Sometimes, it’s the go-home-and-swear-off-the-project/ever-writing-anything-ever-again, because the task ahead of you has just become insurmountable before your very eyes.

The crash is important. The glow of receiving praise is all well and good, but it’s the crash that makes me a better writer.

I was lucky enough to go through I-want-to-be-a-playwright training with both the Liverpool Everyman & Playhouse and the Royal Exchange Theatre, and one of the most important lessons I learnt on those courses was how to take a healthy attitude to feedback. Of course you won’t agree with every comment given on your work – you shouldn’t either accept it all blindly, or throw it all out in a tantrum (I did the second one A LOT). Sometimes, you’re just not ready to hear it yet, and it might not be until a later project that a useful message sinks in. Sometimes, it’s just a matter of personal taste, or a suggestion from someone who would rather your piece went off in a different direction than the one you intend. And, occasionally, of course, there’s just a load of crap from someone who has totally missed the fucking point of my masterpiece.

One of the key things, I’ve found, is to take on board the problems being raised, rather than the solutions offered. Occasionally, someone might give you an alternative title and strike gold. But, more likely, you can read into their suggestion that you add a scene to your play in which aliens eat the main character, that perhaps there isn’t enough action and excitement in your script as yet, rather than have to actually follow their advice.

All of it’s useful, but you have to find the right people. We have an understanding in my lovely fiction writers’ group: if one or two people out of our group of six don’t like something – it’s probably worth fighting for. If it’s a full house – it’s just not working, so get rid, or do it better. That works, because it’s a group full of fellow creatives who I admire and respect. They’ve become some of my dearest friends, but, more importantly, they’re some of the most talented, dedicated, insightful and generous writers I know.

It also works (and has kept working for a couple of years now), because we all give as good as we get. The group is only valuable because of the significant time and effort we put into it on a regular basis. I’ve been part of feedback sessions in the past in which everyone’s motives are too selfish for it to hang together in any satisfying way; other people sit there, making the odd remark if it sounds clever, waiting impatiently for their turn in the spotlight. And false praise can be just as deadly as indifference. If you want your opinion to be worth something, you usually have to learn the painful art of actually telling the truth.

I’m getting used to using feedback to make me a better writer. With my theatre company, Faro Productions, we build in chances for other people to see a show we’re working on long before it reaches our first paying audience. We call them ‘panel rehearsals’ and, terrifying as it can be to present something not-yet-ready, I’d argue that they’ve become the most important part of our rehearsal process. I don’t know if we even have a show until that point. Sometimes they don’t even have to say anything. If you’re watching their eyes glaze over in Scene 4 – you know you’ve fucked up.

It’s also why I love running First Draft, and why I think it matters. If you’re a performer whose work requires a live audience, your mirror or your mum just isn’t going to cut it as a litmus test. We try to provide a safe, fun, supportive environment in which to fuck up royally, should you choose to. It means that you can fix it, and then go on to bigger and better things.

I’m incredibly lucky, because my brilliant support network now extends far and wide. These days, I’ve got friends and fellow creative scattered across the country, pinging things into each other’s inboxes: ‘Could you have a read of this?’. It has to work both ways. Not only is trading creative favours like this mutually beneficial, but often I learn at least as much giving feedback as I do receiving it.

And then I just have to hope and pray that they take it on the chin.

Laura Danielle Sharp in our show, 7 Veils: An evening with Mata Hari. All photos by Phil Benbow

Read more from Abi on the First Draft blog

Sign up to perform at our 3rd birthday party event, Third Time Lucky, in June, or find out more about performing with us

Find out more about Abi’s theatre work with Faro Productions, and watch the trailer for her latest show, 7 Veils, which goes to Brighton Fringe Festival next weekend

2 responses to “The F Word”